When God Takes Away…

Above: Mold removal company truck in front of the apartment. The first day there were four of them.

The last two weeks have been in upheaval and have resulted in a dramatic conclusion. But although the changes have manifested just recently, they have in fact been months, perhaps years in the making.

It has been a very rainy spring and summer here in Florida. This has been great for the plants and eliminating the risk of fires but it has meant that it has been damp and wet for a long time. In the third weekend in April there were several days of very heavy rain, a tropical depression that passed through North Florida. I remember this date specifically because I went with my family to a Boy Scout camp out. It rained the entire time and we left early. The trip was exhausting and shortly after that I started to feel poorly. I had what I thought was a cold which settled in my chest. It seemed to get worse every day but I assumed I was merely run down and had some sort of virus that would run its course. But, it didn’t seem to go away day after day. The symptoms were primarily respiratory — shallow breathing, congestion in my lungs and lots of coughing. Some times I could barely sleep because I coughed so much.

My mother left to spend the summer up north in mid-May and by then I was quite sick but since I do not have health insurance and as a rule do not take medication on a regular basis, I avoided going to the doctor and instead try to treat my “cold” with home remedies. From day to day the intensity of my symptoms would vary so I continued to hold on to the hope that my ‘cold’ would break and I would get better but then the next day I would feel worse.

In May my lungs were continually filled with mucous and I often had shallow breathing. By June the symptoms included pressure in my ears. It felt like I was in an airplane and my ears never popped. I tried peroxide, warm water, compresses, q-tips, and many other remedies to remove the pressure. I went to the pharmacy and one pharmacist suggested Sudafed. That helped a little bit but then the it got worse. Another pharmacist suggested an antihistamine and so I took that. That also helped a little for just a little while.

In the first week of June the apartment flooded with water in the entryway and the kids room and I called the apartment maintenance. I had already been sick for almost 2 months. I realized I had to go to a doctor. I wasn’t getting better and I was alone with the kids.

I went to a clinic in where I was diagnosed with a severe infection in my lungs and my ear canals as a result of the accumulation of mucus. They put me on antibiotics, more Sudafed and Mucenex. Because of the severity of the infection, they could not diagnose the underlying cause. After a week I was still only just a little bit better. My ex left for India. They then put me on a different antibiotic, much more expensive, and this helped a bit more.

After completing all the antibiotics, it was now early July and the pressure in my ears was gone but I was still regularly coughing up mucous. I kept waiting for the symptoms to go away completely but they never did and then I started to feel the pressure in my ears return. Finally on the third week of July I made another appointment at the clinic. I thought I just hadn’t gotten the right antibiotics but I was wrong. They told me I had no infection and it couldn’t be a virus because it had lasted too long, that what I had was Acute Rhinits which is an allergic reaction which affects the respiratory system and is most likely caused by something in one’s environment. The nurse practitioner asked me if there were any environmental factors that could have caused this. I remembered the flooding of the apartment but I wasn’t sure that was the cause because I had been sick so long before that.

Well then everything started moving very quickly. The same day I went to the doctor I asked the apartment manager to have my apartment tested for mold. They testing company came 3 days later with lots of fancy equipment. Although the air test would take a few more days, they informed me that they found a lot of evidence of water damage and that I “would probably not want to be living in the apartment while they fix the problem.” This news was like a thunderbolt. For years our plan has been to move to the Miami area and we had decided that in the coming summer we were going to move for certain. We had even toyed with the idea of moving this summer but we did not have the financial means to do so. When the mold tester advised me we might need to move, the first thought that popped into my head was maybe we should just move to Miami now, maybe God is giving us a push to go. But once again I had to nix that thought because I had no money to do so plus a move like that with my mom out of town was too much for me to manage.

The test was on a Thursday and we had to wait for the following Tuesday for the air sample report. I was relieved to think that this might be the cause of my illness as I am normally so healthy. I could do nothing but wait. On that Monday, my mother arrived for a brief visit, stayed the night and then I drove her down on the following day, the same day that the results were due. Shortly after lunch I got a phone call from the apartment manager that they got the results and they were going to do some work on my apartment so they would move me and the kids into this apartment suite they had to rent out for “one week” while they completed the work. This was a tall order to move what I needed for me, the kids, my work, all with no notice. We did it but I made sure to get a copy of the report.

Once I got settled into the temporary apartment, I reviewed the report. It was quite damming.. It stated right in the report that there was evidence of “reoccurring water damage” and “microbial growth within the north wall” and I realized that this was an issue that developed over time and as a result of neglect. The flooding didn’t cause the mold, it just alerted me to the possibility.

So I proceeded to advise the apartment manager that I wanted to be reimbursed for the months that I was sick plus my medical costs. They refused. Then I wrote out in detail the whole timeline and gave them two choices or else I would contract a lawyer: 1) move me into another apartment which they first test for mold, reimburse me for 3 months plus medical or 2) move me to another home and cover the moving costs plus move in cost (deposit, first month, etc.) and I told them I wanted to live in Miami.  It was a wild card but I decided to throw it out there and made peace with either conclusion.

It was now the end of the week and I drove down to pick up my mother from her house. She stayed with us for one more night, this time in the temporary suite, and the next day I drove her to the airport. I gave the apartment manager a deadline of that Monday to give me an answer before I sought legal counsel. Midday Monday I got a call from the apartment manager and to my surprise, she said they would pay all the costs and handle everything for us to move to Miami. I will not have to pack anything, transport it or even deal with the contract. I was shocked, a little scared, but thrilled too. Be careful what you wish for they say. The first feeling I had came true. 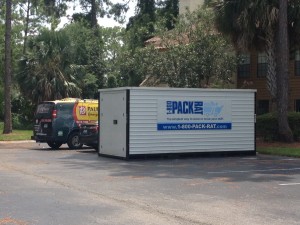 Since then things have moved quickly as I have contacted realtors in South Florida. The mold removal team is currently treating all my stuff with some sort of antimicrobial spray and moving my things into a pod. In a form of Kismet, I had already planned a trip to Miami in the coming week as an end of summer surprise for the kids. My plan was to “preview” the area for the kids to get them excited about the move in the coming summer. Now I am going to look at where we are going to live. And as luck will have it, my brother will be coming with me so I don’t have to worry that I’m not making the right choice. I will have another set of eyes to watch out for me.

I don’t have a move date yet but probably before the month is up. It’s all a bit surreal. When I told my ex about what the apartment manager was offering, his response was “When God takes away, he gives double in return.”

6 Comments on “When God Takes Away…”