The Day of Driving & Waiting

This post is about a wacky day, March 25th, 2014, to be exact, which I like to call “The Day of Driving & Waiting”. Yes it has taken me over a month to get to write it, some posts just had to come first, and yes, it is worth writing still. All in all, in one day, I spent over 8 hours in the car, in 2-3 hour blocks, long enough that I could have driven from Miami to past the Georgia border yet I never left Miami. A crazy, overly ambitious day.

We had a full schedule. My friend had to take his test for CPR certification that morning at 10 and the only location was in South Kendall. My daughter had an appointment at a hospital at 10:30. I consulted Google maps and calculated it that it was 30 minutes south to get to the doctor’s appointment and another 30 minutes south to get to the CPR location. I came up with a good plan to drop my daughter off with my mom at the hospital on the way and then continue onto the CPR location. I’d wait for the test to be complete and then swing back up to pick up my daughter and my mom. That would leave plenty of time to regroup at home before my friend had to be at work by 2pm, when we could all get back in the car again,  drop him off at work and proceed to the fairgrounds for the largest state fair in Florida, the Miami Youth Fair.

It really was a pretty good plan. If only I had stuck to it.

We left the house at 8:40am and despite being rush hour, we were at the hospital by 9:00, a full hour and a half before the appointment. It seemed cruel and unusual to leave them at the hospital for such a long wait so I turned around, lost about 15 minutes in the process and changed the plan. Off we went, all crammed in, down south to the CPR test. Seemed logical that in an hour and a half we could drop my ex off and get back to the hospital in time — not if there is road work and bumper to bumper traffic all the way there. Too late to turn back.

So to avoid a 90 minute wait, we end up with a 4 hour fiasco. It took an hour to get to the CPR test, arriving just in the nick of time. We then turned right around and despite taking a different route back ending up taking an hour to return, just under the 30 minutes late window that would have required us to reschedule. Within minutes of arriving, my ex calls to say that he had passed the test and was ready to leave. I told him he had to wait as we were almost done. But we weren’t. Forty minutes later we finally got seen for a mole that had been bothering my daughter. The doctur decided to remove it and stitch it up. Another 20 minutes more before we left. A third route south was tried and we managed to get there in 45 minutes instead of an hour. By now it was nearly 12:30 and my ex had to be at work by 2:00. No time to get ready for the fair, everyone needed to eat first.

We took a wrong turn coming home by the airport and by the time we rerouted we arrived at home by 1:45. My ex rushed inside, no lunch, just change and leave. He got to work by 2:05.

The traffic gods must have been angry that day because as soon as I dropped him off I got stuck by a drawbridge going up and some sort of marathon downtown that had all the streets blocked off. Took me three times as long to get home.

By the time I returned to the house I was exhausted from driving so I took 2 hours to recuperate before we went to the Youth Fair. Google estimated it to be a 45 minute drive but we left at 4, got stuck in rush hour and road repair, and didn’t arrive until 6.

I moved to Miami, which like any big city has tons of traffic, I knew that would be the case. What was intense about this day was the sheer amount of time spent bumper to bumper, from place to place, that it became surreal because I never went that far but it seemed like I never really got there.

But arrive we did, at the Youth Fair that is, and after driving around the “block” which was easily a three-quarters of  a mile, we finally found where you enter to park. This is when the day it went from surreal to really bizarre. We were all exhausted and ready to get out of the car, but no, not yet. The closest parking to the fair entrance was VIP, which made sense, but then, instead of being able to park in one of the ample open spots open that we passed in the general parking area, we were directed to a far, far away distant lot.

We loaded out of the car and walked quickly the half a mile to the entrance in hope that we could still use the “before 6p.m.” discount coupon we had. As we approached the entrance we saw the huge lines getting in. More waiting.

The good news was that they honored our coupon after the 15 minute wait. Then we got in and had to wait in another line for the kids to get their ride wristbands. I wish I could have videotaped what happened next.

We were directed to a tent where on one side was a row of tables, each with an elderly Latin woman sitting there. On the other side of the tent was a row of burly men, who looked like someone you would see working as a bouncer or causing trouble in a biker bar. We walked in and started at the scene not knowing quite what to do. One woman, who was particularly wizened, beckoned us to approach. We handed her the tickets for the ride bracelets. She picked out two bracelets. When I reached for them she pulled her hand holding the bracelets back and pointed to the men. With a thick Spanish accent she said “They need to put them on.” Only when we nodded in agreement would she give us the bracelets. I handed one bracelet to each child and we walked across the tent to the burly men. They bent down and carefully snapped on the bracelets.

The meaning of this ritual escaped me but by then we just shook off the strangeness of it all and tried to go have fun.

It was still pretty early at that point but the people were pouring in. One of the things they were selling was an “express pass” which allowed you to skip ahead of the line for additional $$ and as the lines started to form I soon understood the value. But there was no budget for that so we just picked the our favorite rides to wait for. One of the rides looked really fun so we got in line. My mother thought the ride was too intense and opted out and went to wait in another line. After a long wait it was finally our turn to go on the ride when the ticket taker stopped me and told me Elsa was too short to go on. We had started the line way far away from the height measurement and never saw it. So I told Marcos to wait for me and I took Elsa to where my mother was in line. But when I returned to where my son was, the ticket taker wouldn’t let me back in line and pointed to a sign that said “No leaving the line.” I explained that the only reason I left was that my daughter couldn’t ride and I couldn’t leave her by herself. The other people in line pleaded my case and said I should be let in but the man would not be swayed. Marcos went on the ride by himself. 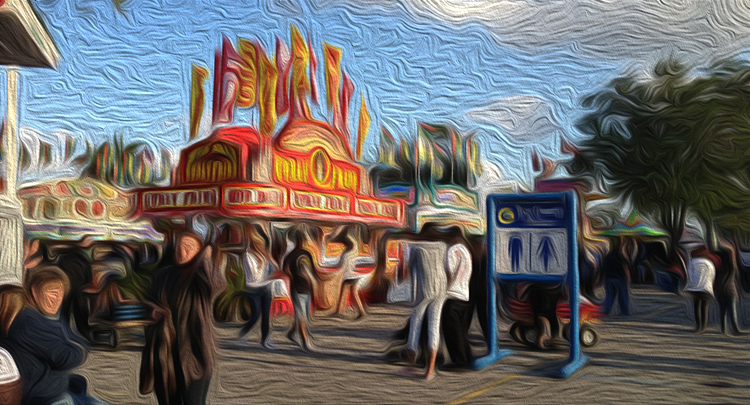 Right by the line was a booth with a police officer there. I was so frustrated with the man’s attitude that I decided to complain. The officer heard me out and spoke to a different man operating the ride who agreed to let me go on. But when I approached the line the original ticket taker stepped up and told the officer that he wouldn’t let me on. Now the police officer was frustrated and directed me to a booth about 30′ away which had a big sign which said “Guest Services”. By now I was starting to wish I hadn’t complained. I didn’t intend it to be a big deal, I just wanted the guy to get his comeuppance. But, now, I had had the officer looking at me as I walked over to Guest Services so I had to follow through.

Now this day had been surreal from the beginning and didn’t seem like it could get much stranger but once I arrived at the Guest Services booth, I realized I was wrong.

Staffing the Guest Services booth were two very sweet, very British young women who sympathized with my plight to an almost extreme degree. They had me fill out a lengthy form documenting the complaint and then one of them marched right over to the ride, indicating for me to follow, and then went up to the disagreeable ticket taker and insisted that I and my son both get to in front of the line and ride on the attraction. The other line holders actually cheered as the ticket taker let us in while grumbling about his boss under his breath. Despite the hassle, the ride was worth it.

By now it was getting late. Only time for the kids to take one more ride and then get some food. We got to the car at 10:00, the time my friend got off work. We picked him up 40 minutes late and finally made it home, parking the car for the night and a much needed rest.