Gandhi for a New Generation

Above: Marcos showing off his America collage 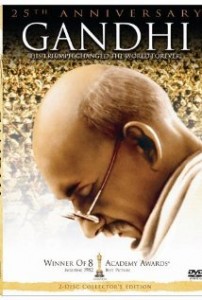 Last weekend was a holiday weekend ending with Martin Luther King Day. During the school days before the holiday, my kids learned about MLK and his effect on our country’s history. My son Marcos is particularly inquisitive and when he would come home from school, he would ask me lots of questions about MLK — what he stood for, why he did what he did, how he died. During one of these question and answer sessions I brought up a parallel to another man of peace, from the other side of the world, who had a similar edict: Gandhi. Gandhi, like MLK, had wanted equality for all people, believed in non-violent confrontation, and experienced an untimely death due to assassination.

Marcos pays attention to anything I tell him about India because India is where my ex comes from and therefore learning about India is his only way to be close to him right now.

The last day of school before the holiday weekend Marcos came bounding off the bus. “Mom! Guess what? We learned about Gandhi in school today!” He was so excited. He said how his teacher told them just what I had said to him earlier that week, referencing Gandhi in the context of another man of peace like Martin Luther King. To learn about anything related to India is special to Marcos but in school, especially so because it’s so rare.

Marcos’ enthusiasm for learning about Gandhi made me want to show him the movie which I have. I knew this was the time while his interest was fresh. And although it wasn’t a conscious decision, the theme of the weekend ended up being about peace with a strong slant towards India.

On Saturday I decorated my Hindu altar box — similar to the one my ex has in Santo Domingo — a cardboard box cut into a shadow box and covered with shiny paper and baubles. I will use it to hang the tapestry of Lakshimi that I am nearly finished with. While I worked on the box, which took a couple of hours, Marcos worked on a collage about America for Boy Scouts. Right in the center he puts Martin Luther King, a handout from school, and surrounds him with flags, fireworks and words. In fact, the only people on the poster were also “of color” – our president Obama and Andrew Young who marched along with King. 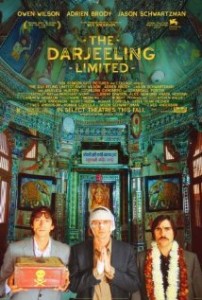 On Sunday we watched The Darjeeling Limited, a quirky movie by director Wes Anderson, which is about three brothers bonding (and finding inner peace) while on a trip through (you guessed it)… India. Although the movie made little sense to Marcos, he enjoyed seeing the scenery about India and immediately wanted to watch it again but we abstained.

On Monday the kids didn’t even want to watch cartoons, they went straight for another movie, the live action version of The Jungle Book which my ex and I had tried to watch while in Santo Domingo. Marcos kept referring to the lead character as my ex and cheering him on when he fought Shere Khan — I can’t really tie in the theme of people with this one but definitely India.

On Tuesday the kids were still off from school (teacher planning day) and I knew this was my last chance to watch Gandhi. I expected Marcos to get bored and watch part of it at a time., after all, the movie is three hours long, but no, he stayed attentive, rapt even, through the whole thing.

Each time I have watched the movie Gandhi it has been special. The first time was in the theater as a teenager and I was deeply moved; the second was with my ex who saw it for the first time; and now with my seven-year-old son.

One scene in the movie evoked an active response from Marcos. The one which shows the Amritsar massacre — on Sunday 13 April 1919, British Brigadier-General Reginald Dyer marched his fifty riflemen to a raised bank and ordered them to shoot men, women and children who were peacefully assembled. He ordered his troops to fire upon them for about ten minutes, killing an estimated 1,000 and injuring more than 1,500, of the 15,000 to 20,000 people that had assembled. Marcos’ response was to jump up, get his toy (Nerf) gun and fire upon the British soldiers.

The next dramatic moment was when they showed the Great Partition which is when British India was divided in three parts based on religion. Gandhi was opposed to this, wanting a united India, but many others felt that Hindus and Muslims were too different and could not live together. Thus part of what had been India under British occupation then was separated off to form Pakistan. And the area which is now Bangladesh was separated off and called East Pakistan.

The Partition was a highly controversial arrangement, and remains a cause of much tension on the subcontinent today. The British Viceroy, Lord Mountbatten of Burma has not only been accused of rushing the process through, but also is alleged to have influenced the Radcliffe Line in India’s favour since everyone agreed India would be a more desirable country for most. However, the commission took so long to decide on a final boundary that the two nations were granted their independence even before there was a defined boundary between them. Even then, the members were so distraught at their handiwork (and its results) that they refused compensation for their time on the commission.

Some critics allege that British haste led to the cruelties of the Partition. Because independence was declared prior to the actual Partition, it was up to the new governments of India and Pakistan to keep public order. No large population movements were contemplated; the plan called for safeguards for minorities on both sides of the new border. It was a task at which both states failed. There was a complete breakdown of law and order; many died in riots, massacre, or just from the hardships of their flight to safety. What ensued was one of the largest population movements in recorded history. According to Richard Symonds: At the lowest estimate, half a million people perished and twelve million became homeless. [Source: Wikipedia]

As the Muslims fled to Pakistan and the Hindus living there fled to India, each group passed each other on the trail. With no military presence to keep the peace, conflict broke out at all levels and many, many died. The partition was India’s holocaust and to this day there is a sting when it is talked about.

India is barely mentioned in U.S. history, especially at grade school level and then it is only in reference to the Spice Trade. Knowledge of India in the U.S. in popular culture can be summed up as: curry, Bollywood, red dots on the forehead and arranged marriages. It’s unfortunate that we know so little about a country that has the largest population in the world, that is home to the only living classical culture and language, is one of the most religious devout, and is positioned to surpass China as a future superpower.

There is so much about the world that I do not know, so much to learn, but I am grateful that we are always learning.

2 Comments on “Gandhi for a New Generation”