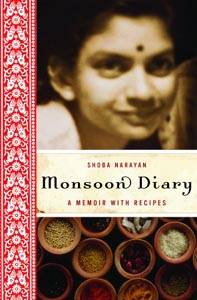 I stumbled upon this gem of a book in the cooking section of my local library. It wasn’t a cookbook exactly, it was a memoir interspersed with recipes. The memoir was by Shoba Narayan, a woman who grew up in India and I was intrigued enough to check it out. It has been a while since I tried to read a book — between running a business and raising two elementary school kids, it is either too noisy or I’m too tired. But I checked the book out with the solace that I didn’t have to read it, I could just look up the recipes.

But read it I did and I could barely put it down. When you read a book that resonates with you in a strong way it is like sinking your teeth into a decadent dark chocolate truffle — so rich while it is in your mouth that when you are done you feel like something is missing.

Imagine my surprise when I open the book and start to read and discover that the author is not just from India but South India, the city of Chennai (formerly Madras) in fact which is the exact same place my ex was from. I felt like I had been given a gift, a secret window into his upbringing — a rich present it was.

The author Shoba Narayan family and my ex differed in status. She is from the upper caste, Brahmin and he comes from a lower caste of fishermen, so the circles they traveled in were different but the rest sounded very similar.

My ex didn’t talk much. If he could he would pass days without saying a word. So it is with rare pleasure I get to be around when he did feel like talking, especially if he was talking about his life in India. On these such occasions, he often mentioned his grandmother who lives in a village outside of Chennai. His description was of a shrewd, powerful woman who manages a property filled with coconut, mango, almond, banana trees and much more. A bountiful place, she hates to waste and is always thinking of resourceful ways to increase her wealth.  In her pride of her agricultural bounty, she was always suspicious of others, protecting what she had while on the lookout for those who wish to take from her. Devoutly Hindu with a deep love for family and what is “correct”, His grandmother was a very important influence.

In the Monsoon Diary, Shoba Narayan describes her grandmother in a similar way. She calls her “Nalla-ma” and the description was so close to what I pictured from talking with my ex that it felt like the book filled in the details of all the snippets I had heard — the book took a pencil sketch into a full color painting.

“Your mother was pushed into the buttermilk when she stole betel,” my grandmother began, jumping into the middle of a story as usual. “It was at a wedding at our ancestral home in Kerala, and the backyard was like a battlefield with large brass vats filled with rice, gravy, buttermilk, porridge, and cumin water. Right in the middle of the ceremony, you mother quietly crept up to the betel tray, grabbed a couple of betel leaves, and went out to the back where the cooks were cooking lunch. She hid between the vats and began to chew her stolen betel. It was there that your young uncle Ravi found her. He grabbed her long braids and began taunting her. He would tell everyone about the stolen betel, he said. Well, what does your mother do? She pulls Ravi’s spectacles off his face and stomps on them. No half way measures for that girl. Ravi is standing there, almost crying with anger — he can hardly see. He chases her around the vats. Your mother rushes up a ladder, silly girl. Ravi rocks the ladder, and your mother falls, plop, right into a vat of buttermilk. Thank God it was buttermilk. Can you imagine if it had been some boiling water, or even curried sambar? Now, these vats are huge, like I said. Tall, about twice your mother’s height. And the girl can’t swim. So she sinks into the buttermilk, rises up, gurgles like a toad, and goes back down again. Ravi is petrified by now. He climbs up the ladder and tries to reach fo her. your mother, of course, grabs Ravi and pulls him down with her. It was your great-aunt Gita who found them, two slithering masses, soaked with the white buttermilk. She grabbed your mother by her long braids and puled Ravi out by his ears. That’s why your uncle Ravi’s ears are pointed. Because Aunt Gita grabbed them when he was a kid and yanked him out of a vat of buttermilk.”

What my grandmother did best was tell stories. She had a phenomenal memory that stored colors, textures, sounds and smells, and a gift for shaping them into spellbinding narratives. With a few words, she painted a vivid portrait of her parents and grandparents, volatile and passionate in temperament, who drank “loads of ghee and lived to be ninety”; about their live under the British rule when they were not admitted into British clubs; about her years as a child bride when she feared her father-in-law and wouldn’t even stand in front of him; and about my antics as a baby. She was my umbilical cord to my past. [Excerpt from Monsoon Diary, Baby Brother Arrives]

That is my favorite passage in the book because it is so rich in imagery, so detailed, with a story of childish antics that is all too familiar and yet in surroundings that are so very foreign from anything I know.

I don’t know why I haven’t really explored many books on India before but I think it might be because India is so diverse. I have read some books about it’s history but I had longed to find a book like this one which gave a window into life there.

As the book goes on, the author grows from a young girl into a woman, goes to college in America and studies art, meets her future husband through and arranged marriage and settles down by the end of the book. Once she got to America, except for a few anecdotes, I found it less interesting. After, all art school is familiar territory for me. It’s India I long to know. Each chapter ends with a recipe which ties into the chapter. A cute idea but also not the main attraction for me. The real gem was the opportunity to “live in India” for a little while through the character and that for me was…priceless.