The Urge to Create

Some people are compelled to race cars. Some people are driven to acquire wealth. Even others make it their life’s mission to fight for justice. As the daughter of two fine artist, I am driven by the urge to create.

I grew up in a creative world, one where creativity was celebrated. I was lucky enough to learn at an early age how to knit, crochet, sew, paint, draw, take (and print) photographs, cook, make jewelry, macrame, needlepoint, latch hook rugs… just about anything you can make with your hands, I can do. In fact, I can make so many things that I often struggle with how to choose, to channel the energy. For others, my creativity is celebrated but in some ways I can tell it makes them a bit uncomfortable, it’s just too much.

My father struggled with this too. He was a painter, filmmaker, photographer, screen writer, animator and craftsman. People didn’t know how to deal with him because he could do so many things successfully. “You are so talented!” I heard people tell him, with a bit of discomfort in their voice. Now I hear them say it to me.

What people don’t understand is that my urge to create so many things is not driven by ego, I don’t do it for praise or awe, but rather it is a compulsion, something I simply must do.

Although I do draw and paint, my creative expression is more in terms of making things. When I first moved to the Dominican Republic, I used my creativity to fill my home with color.

Then, when I had children, my creativity was directed towards them. I made them dolls, toys and costumes. Lots and lots of costumes. In fact, I made them so many costumes when they were little and we were living in Santo Domingo, that my Dominican friends asked me if it was tradition in the U.S. to give costumes at Christmas.

Truthfully I have so much making things that I don’t think of the work involved.Here are some of the things I have made for my children over the years.

My creativity is also practically applied. When we moved to the U.S. from the Dominican Republic, I wanted to take several plastic crates on the plane but the airline only permitted bags. So, I custom sewed a bag to zip over the crate.

I also like to try new things so sometimes I make things just to see if I can figure it out. I especially like a challenge. If the projects was particularly challenging, I usually don’t repeat it.

I also have used my creativity to express my love. When I was getting divorced from Elsa and Marcos’ father, I made them each a tapestry to hang in their room. They got to pick which animals they wanted. I thought it would cheer them up during a difficult time.

The tapestries were also healing to me as I worked on them at night. They kept me home and out of trouble during a difficult, emotional time. They gave me a purpose to focus on.

When my ex and I got together, I made him a tapestry of his favorite Hindu deity.

Once I came to the U.S. with the kids, leaving my ex in the Dominican Republic to wait for the visa, I made another, much smaller wall hanging of the goddess Lakshimi to hang in my home.

When we first came back to the U.S., we lived with my mother in her tiny house so my creativity in that limited space was focused on cooking. But once I got my own place in Ponte Vedra, my creativity expanded again.

Then from Ponte Vedra we moved to Miami and althought I still created things, I slowed down because the financial pressure was so great. But I did manage to make a few things in the two years I was there.


Now we have moved away from the hustle and bustle of Miami, to a calm and laid back life in Fernandina Beach. With this relaxation, I have found my creativity is blossoming.

I made a lace curtain. A far more complex project than I expected. 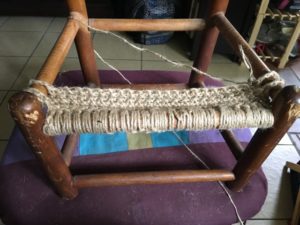 Perhaps one of the projects I’m most proud of is the simplest one I have done recently. I had a chair from my childhood that needed repair. I figured out I could crochet a new seat with twine.

What’s next? Well I have lots in the works but hard to say what comes first. They say that knitting and crocheting relieve stress and also keep the mind active so I guess it’s all good!