For Father’s Day we all went to see a professional baseball game, the Miami Marlins vs. the Pittsburgh Pirates. Ironically, for a person who doesn’t follow any sport and could care less about most sports in general, I have seen a surprisingly wide range of professional sporting events live. From a soccer game in Port-Au-Prince, Haiti to a polo match in Long Island, NY, seeing a sports game live can make even a non-sports fan get into it.

So last Sunday we navigate the traffic to the Marlins’ Stadium and park our car on the street for $10 paid to one of the local Latin residents. Not sure how they can “rent” a public street but this practice is very common in Santo Domingo so I just accept it and am grateful for a parking space $15 cheaper than by the Stadium. We arrive early and take our seats. The Marlin’s Stadium is a very cool design — it has a retractable roof so no need to worry about being rained out or burned by the sun.

The players enter and the game begin. The first point is scored by the Pirates. My ex from India  looks perplexed and asks “Where are the dancing girls?” It is then that I realize that this is my ex’s first American baseball game. I reply “Do you mean cheerleaders? They don’t really have cheerleaders for baseball but sometimes during breaks.” To which my ex responds that in India, each team has a set of dancing girls who dance each time the opposing team  screws up a point. Don’t know if you would call it cheerleading really, more like mocking…

In India they don’t have baseball, they have cricket which was inherited from the English. I have to admit that my knowledge of cricket consists This is Spinal Tap where the band manager used to brandish a cricket bat to keep everyone in line. So clearly, I don’t really follow sports as I said.

I have been to three other professional baseball games in my life: the Boston Red Sox at Fenway Park and two games in the Dominican Republic with teams I can remember. But is has only been this year, with my son in little league that I actually learned how baseball is scored which makes it much more fun than just cheering when everyone else does.

My son’s little league games were a comedy of errors. They hardly caught the ball or knew who to throw it to when they did. It was exciting to see a professional game after a long season of little league. 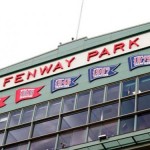 I don’t remember much about when I saw the Boston Red Sox. I don’t think I paid much attention to the game then. I mostly remember how hot it was, the burning sun and the smell of hotdogs. In contrast, in the Dominican games we went to, the smell of beer was predominant and the enthusiasm was overwhelming. The entire crowd cheered when a point was scored, no matter which team it was. They love the game that much.

Our Marlins vs. Pirates game started off like a landslide for the Pirates but then it got exciting, when the Marlins  scored a double, tying them with Pirates and then in the 10th inning scored a point which won the game 3-2. Walking back to the car I heard a lone trumpet player playing a staccato version of Another One Bites The Dust which kinda summed up the day.

This was our second sports event since we came to Miami. Our first was going to see the Harlem Globetrotters at the American Airlines Arena downtown. I remember the Globetrotters from when I was a kid and they had a cartoon show on Saturday mornings. I thought the kids would enjoy seeing them. 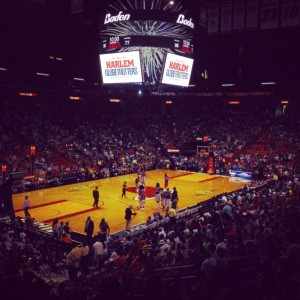 Never having been to an event at that arena, I wasn’t sure what the parking would be like so we decided to take a bus there, the same bus that my ex often takes to work. There is the Miami-Dade Metro bus which is the official city transportation option, air-conditioned and stopping at official bus stops. There is also the Miami Mini Bus which is the size of a large van, cheaper than the Metro, frequented predominantly by Haitians, and stops wherever you say “thank you.” Yes, that is right, when the travelers want to stop they don’t say “Stop please.”  or “I need to get off here.” they say “thank you.” my ex calls it the “thank you bus” and when we rode on it we heard for ourselves. The bus driver even will say “Is anyone thanking here?” when it approaches a stop.

So in the case of the Globetrotters, the most memorable cultural experience was not from the game itself but from traveling there.

As I said, I have been to wide range of sporting events for a non-sports fan. When I was a kid I went to a few soccer games when I visited Haiti with my father. I remember that they were full of energy and lots of fun. Like their island counterparts, the Dominicans, the Haitians seemed to enjoy the game for itself and not be as focused on a specific team although each had their favorites.

One of the least exciting professional games I went to was football with the Jacksonville Jaguars. No offense intended to the millions of football fans out there but I just don’t get it. I went on an invite from a friend and because, even though I wasn’t crazy about football, I figure “don’t knock it until you try it.” So I went and for the nearly four hours, I spent about 3 1/2 hours waiting for the players to do something. Then about 10-20 seconds of action followed by more waiting. Compared to what the world considers futbol (soccer) which truly is action-packed, I found American football to be quite boring.

In contrast, the most exciting sporting event I have ever seen is polo. I was invited to go to a match in Long Island by a high-school friend. We were both studying art at the time so unlike the blue blood crowd, we were scruffy and broke. But we scraped together the money for the two-hour train ride out there, packed our own lunch in our backpacks, and sat on the grass. It was so much fun. Constant action, beautiful horses, gorgeous location and when the game wasn’t on, great people watching. I would jump at the chance to see another match sometime.

Speaking of matches, the runner up to the most exciting sporting event for me would be tennis. I had an ex-boyfriend who was obsessive about tennis and through osmosis I learned about the scoring and overall merits of the game. Living in North Florida, we were close enough to go to the women’s tennis tournaments at Amelia Island Plantation. It is a game that requires a great deal of athletic skill, easy to follow the scoring, and full of drama.

So I many not be a sports fan per se, but I will continue to have fun broadening my education.