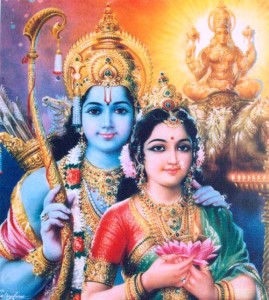 I have been reading a lot about Hinduism of late. Perhaps it’s a way of searching for faith during a difficult time. All I know is that it give me peace to learn.

Rama is my ex’s favorite god, an avatar of Vishnu. Rama is noted as an example of strict morality, pure character, and as a fierce warrior.

Rama’s true love is Sita, often viewed as an avatar of Lakshimi. Their love story is featured in the Hindu epic Ramayana.

The Ramayana, one of the most popular stories in the Hindu tradition, tells of Rama’s exploits. As a young prince he performs heroic acts and in due course wins Sita as his wife after succeeding in bending a great war bow. Cheated of his rightful role as successor to his father the king, he goes off into exile. Sita and his brother Lakshmana insist in going with him. One day Sita is kidnapped by the ten-headed demon Ravana and carried off to his stronghold in the island of Lanka. Helped by Hanuman, the god-king of the monkeys, Rama eventually defeats Ravana and his army in battle and rescues Sita. They then return to their kingdom where Rama is given his rightful place as king.

Rama is the model of reason, right action and commendable virtues. He is often depicted with a tall conical cap which symbolizes his royal status. — [Source] 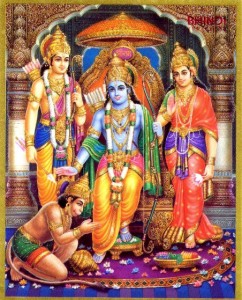 Rama’s courage in searching for Sita and fighting a terrible war to rescue his wife and their honour is complemented by Sita’s absolute devotion to her husband’s love, and perfect chastity despite being Ravana’s captive. Rama’s younger brothers, namely Lakshmana, Shatrughna and Bharata strongly complement his piety, virtue and strength, and they are believed by many to belong to the Maryada Purushottama and the Seventh Avatara, mainly embodied by Rama. Rama’s piety and virtue attract powerful and devoted allies such as Hanuman and the Vanaras of Kishkindha, with whose help he rescues Sita. The legend of Rama is deeply influential and popular in the societies of the Indian subcontinent and across South East Asia. Rama is revered for his unending compassion, courage and devotion to religious values and duty. — [Source] 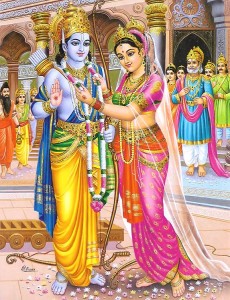 One part of the story of Rama and Sita tells about her return with Rama after he rescues her from the demon. Rama believes she was faithful to him during her time held hostage but other people were not so sure. To prove the purity of her love, Sita walks through the fire and the flames turn into lotus flowers beneath her feet.

I love the imagery.