Above: I borrowed this image from this Facebook profile.

I wished they taught still taught Latin in all schools. When I was a kid I didn’t start learning another language until high school which was French. I chose French because as a child I had spent quite a bit of time in Haiti and as a result had picked up a lot of Creole. I studied French for 4 years but never really mastered it. I didn’t really master a second language until much later, as an adult, when I moved to the Dominican Republic.

When I moved to the Dominican Republic I knew very little Spanish, just a smattering of words. I was able to communicate with my clients in English as they were professionals who had learned English in order to do business. But communicating on a local level was a different matter and things like calling a taxi or ordering at a restaurant, were challenging. I set out aggressively to learn Spanish, buying several books on Spanish verbs and grammar. First I learned the alphabet, then my numbers. After, I made diagrams of household objects, the human body, places on a map and labeled them in Spanish. I would use the new words I’d learn as often as I could until they stuck. I learned key phrases to make life easier in situations that would drive me crazy. Like, for example when I learned the past tense of “to call” so I could tell the passersby who would ask if I needed a taxi “Yo llamé” (I already called one) instead of “Yo llamo” (I call) which would prompt repeated offers to help me out and call one for me. Just the simple addition of the past tense in the verb would let the people know I didn’t need their help.

One of my pet peeves were wrong number calls. These happened all the time and it took me a while to figure out what I needed to say to get the caller off the phone. First I tried: 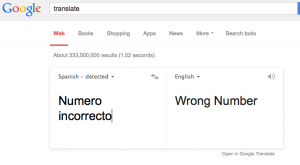 Which, according to Google is the correct translation. But that didn’t work. The other callers just kept talking, asking for someone I didn’t know. Then I tried saying:

Which literally means (I’m American, you called my house). But that didn’t work either. I was very frustrated. Daily I would get several wrong number calls and each time I would try a different combination of explanations, often ones which, in my broken Spanish, would take several minutes. It was driving me crazy. Finally I asked one of my Dominican friends who spoke English and she gave me what I needed. All I had to say was: 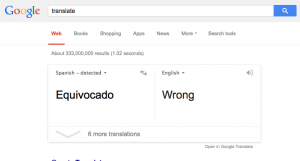 That one word, which means just the same translation as “incorrecto”, wrong, was what I needed. I said that and the caller would hang up immediately. Relief!

Of course there were many hilarious mistakes I made along the way, like when I told the nanny that “hay dos platanos en el inodoro” (there are two plantains in the toilet) instead of horno (oven) — I only realized my error when the nanny had a look of horror on her face — or when I said about my son “tiene boletos en su brazo” (he has tickets on his arm) instead of “bolitas” (little bumps, ie., a rash).

But you can’t learn without making mistakes and there are so many clear benefits to learning another language that go beyond just being able to communicate in another country. I can attest to this.

When you grow up as a child learning a single language, you learn the words that describe specific things/feelings, etc.. These words become THE words, the ONLY words for those things. The sense of absolute definition with your language dominates how you think about language in general. Whether you realize it or not, in your mind, you think of your language as having the “right” words and all the other words for the same thing in other languages as “wrong” words. This is not a conscious evaluation but one that comes from learning a single language as a child, the time when our association with languages are just forming.

However, children who learn more than one language, overcome early on this hypothesis of right and wrong in language. They all start out that way, I remember trying to convince my daughter that “elephant” and “elefante” were both correct words but different languages. Eventually she came to accept it. Because they have to overcome the right/wrong view of language first, it is common for children whom learn more than one language may experience a delay at first in speaking and reading as they assimilate the concept of multiple words for the same thing. But, once they get it, they experience a flexibility in their understanding of language and comprehension, one which makes it much easier to learn more languages. This is because they accept that there are many different ways to say the same thing and there is no one right way, instead language is just a form of decoding as it were, how a particular culture/language describes things.

As an adult, when you are learning another language, you first need to banish that “truth” you learned as a child of the “right” words for things and accept that there are multiple “rights”. It’s amazingly challenging to do this because your mind keeps wanting to correct you and it is only through full immersion, forcing yourself to overwrite your brain’s first instinct and speak another language, that you can finally shift and be able to switch between different words/languages in your mind.

But once you can do this, an amazing world opens up to you. You realize that there are certain words or phrases that are unique to a specific language, without a direct equivalent, that different languages offer different forms of expressions. It’s a pretty profound concept. For example, take this blog name, Amor y Sabor. Amor means love, that’s fairly simple to translate but Sabor can most easily be translated as taste, as in the sabor of a particular dish. But in English, taste, the physical sense of how a meal tastes in one’s mouth or it can mean what someone likes as in “She has good taste in clothes.” Because of the two different definitions, Amor y Sabor isn’t accurately translated as Love and Taste but rather Love and Flavor, a subtle but very important distinction.

When you learn another language, you also realize where certain words originate. For me, working in advertising, I found it fascinating when I realized where certain brand names came from like “Aveda” and “Aveeno” from avena, the word for oatmeal in Spanish. Or that the word ‘negro’ (NEE-GROW) which had become a politically incorrect term for African-Americans, was also the same word as negro (NEY-GROW), which was the Spanish word for the color black. Likewise, in the Dominican Republic, many brands and English words became integrated into Spanish terms like pampers PEHM-PAR for diapers and cloro (aka Clorox) for bleach.

So now, reading this, you can imagine why I wish I knew Latin because that is the true language root, at least for European languages, and learning one language just cracks the door but doesn’t open it wide. Still, I loved the fact that I can look at the photo I use above and not only get the joke but find it funny too.

2 Comments on “Learn Another Language”