Arrow of the Blue-Skinned God, part 1 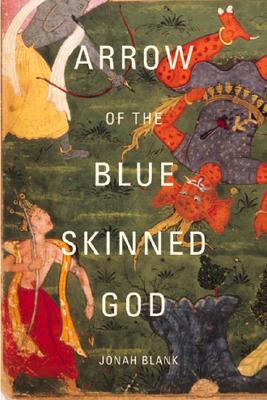 India has two great epic stories in its history. One is the Mahabharata and the other is the Ramayana. I first became aware of the story of the Ramayana through my ex. Rama is hiss idol, so I figured it was worth reading up on Rama’s story. And read I have. Recently I finished a fascinating book called Arrow of the Blue-Skinned God by Jonah Blank. The author wrote the book when he was 25, the same age as Prince Rama at the beginning of the Ramayana and the book is centered around the author’s quest to trace Rama’s journey from his homeland into exile and beyond. This book was fascinating to me on so many different levels that I must divide my thoughts into two posts, one to talk about the historical side of the story and the other to talk about the symbolism of the story.

“The three-thousand-year-old epic Ramayana chronicles Lord Rama’s physical voyage from one end of the Indian subcontinent to the other and his spiritual voyage from Man to God. In Arrow of the Blue-Skinned God, anthropologist and journalist Jonah Blank gives a new perspective to this Hindu classic — retelling the ancient tale while following the course of Rama’s journey through present-day India and Sri Lanka. Ultimately, Blank’s journey — like that of Lord Rama — evolves into a quest: to understand the chimerical essence of India itself, in all its overwhelming beauty and paradox. ” [1]

Prince Rama is celebrated for his strength of character, moral correctness and amazing ability as a warrior. The author, however is no comparison to Rama, appearing to be an average man, raised in the culture of the Western world and at the age of 25 is still far from knowing he what wants in life. Yet through his journey, walking in Rama’s shoes so to speak, he demonstrates how the Ramayana is a critical part of the cultural makeup of India and its underlying mythology.

“Ramayana has had a great impact on the culture of India. It gave form to the values of its society, reiterating to countless generations models of correct behavior. The Ramayana is a store house of knowledge. One has to transform such knowledge to wisdom by applying the principles and core values in ones life. Reading and re-reading the Ramayana can be a rewarding experience for people of all ages at all times.” [2]

An epic poem on the scale of Homer’s The Odyssey, the Ramayana tells the story of Prince Rama, destined for the throne, who was unjustly exiled from his own land because of a long forgotten promise his father had made to atone for a past sin. Rama willing accepts exile because he fulfilling a duty to his father. Likewise, Sita, Rama’s wife, follows Rama into exile, against his wishes, out of duty to her husband. While in exile, Rama makes some enemies and one of them, the demon king Ravana, takes revenge on him by kidnapping Sita. Rama searches for years to find Sita and is unsuccessful until finally he enlists the aid of Hanuman, the monkey god, who with his help and those of the monkey kingdom, finds Sita. Rama fights a dramatic battle with dreadful, yet charming, demon Ravana, ultimately vanquishing him and rescues Sita. For those of the Hindu faith, it is India’s greatest love story and a model of the ideal love all couples should strive for.

“The Ramayana isn’t only about Lord Rama and his attempt to rescue his consort Sita. Ramayana is also about devotion, loyalty, family roles and respect to elders.” [3] 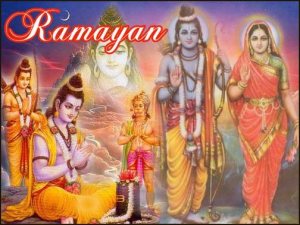 Like another great religious epic, the Bible, the Ramayana is considered by Hindus to be based on historical fact, regardless that much of the story seems too fantastic to be real. Like Jesus, Rama is considered to be a real man who through devotion in life becomes a god, an incarnation of Vishnu. The Ramayana is believed to have taken place thousands of years before the story of Jesus, around 7500 B.C.

As unbelievable as many of the parts of the Ramayana may be to modern readers, such as a demon king with ten heads, they are no more unbelievable than Jesus turning water into wine. In the Arrow of the Blue Skinned God, author Blank delves into where some of the aspects of the story may have originated, and that perhaps, the Ramayana is based on historical fact which through the course of time has evolved into a story of mythological proportions.

In order to understand whether the Ramayana is based on history or myth, one first needs to examine India’s history. As a Westerner, I knew nearly nothing of India’s history other than perhaps the importance of the spice trade. It’s a shame we are not taught more about this remarkable country, which over the thousands of years of its existence has been repeatedly invaded by foreign nations, each nation leaving its mark without destroying its core.

“India has never been a melting pot… It is more like the bazaar … an exuberant, disorderly display of every color, flavor… it is a profusion, a confusion, but never a fusion.… There is greater racial diversity in India than in most entire continents.” [4]

First came the Aryans, people from the Indus valley, most likely the same area that is now Iran. These people were not the blue-eyed, blonde hair Aryans we associate with the term but rather more like modern Iranians — light skinned but not white, with dark, straight hair. After the Aryans came the Persians, the Greeks, Chinese, the Muslims (one leader, Mahmud of Gazir, invaded India 17 times over 26 years), then the Turkish, the Mughals (the dynasty responsible for the Taj Mahal), the Portuguese, the French and lastly the British. The Muslim invaders were particularly devastating to India because they often tried to dominate India religiously by destroying Hindu temples and trying to force Hindus to abandon their faith. India has tolerated more than most countries but religious persecution has never been successful in India, their faith is too strong.

The Ramayana takes place after the Aryans have been in India for many generations and their culture has assimilated into one great India. The Aryans dominated the native Indians who were there before them. They were called Dravidians and they were darker skinned with broader noses and a primitive, tribal culture. My ex is descended directly from the Dravidian line which are now know as the Tamils. While some intermixing between Aryans and Dravidians must have taken place during the generations the Aryans had been there, the Dravidians still remained as a pure race, moving south from the invaders and concentrating in Southern India, in the area now known as Tamil Nadu. It wouldn’t be the first time that dark skinned, primitive people were described as monkeys. Perhaps the origination of the monkey kingdom is really the Dravidian settlements. The locations match as Hanuman’s kingdom is said to be in South India.

Another connection is with the island of Lanka which is where the demon Ravana takes Sita. Both the name and the location of the island correspond to what is now Sri Lanka. Historically there has been tension between mainland India and Sri Lanka for thousands of years. In the Ramayana, the island of Lanka is described as filled with demons who have a very evolved culture and are quite refined despite that they are demons. It’s isn’t too much of a stretch to imagine that the demonization of the Lankans could be a result of differing beliefs and political strife rather than real, ten-headed monsters. In fact, some Hindus even worship the demon king Ravana, despite that he was the enemy of the hero Sir Ram, because historically he is respected and in many ways he was Rama’s equal: an exceptional opponent and charismatic enemy.

I am by no means a scholar, just an interested pupil. In researching this post I came across conflicting viewpoints. Some Indians, my ex is one of them, believe Rama was absolutely real and that the greatness of his achievements are an inspiration for everyone to strive towards. Others believe the Ramayana is all fiction, a rich story to embellish their faith. Unlike Christianity, Hinduism allows one the freedom to disbelieve and still be considered faithful. One can even worship god’s opponent, as some do with Ravana, and still be true to their faith.

I don’t know if the story is real but after reading Arrow of the Blue Skinned God I think it certainly could be. One thing is without question and that is that the Ramayana, and its hero, Prince Rama, is an integral part of India’s past, present, and future.

“All venerated men such as Jesus Christ, Lord Buddha, Mahavira Vardhmana, Prophet Muhammad have stressed treating all men as equals. Lord Rama was foremost among these great men in setting this tradition which sadly is not adhered to even in these modern times.” [5]

2 Comments on “Arrow of the Blue-Skinned God, part 1”